I have seventy Grade 2 students, so clay projects are a production (especially if I have to do two firings, one for bisque and one for glaze). This clay owl project from Teaching Art with Attitude that I found on Pinterest is great because they only need the one firing and they get finished with oil pastel and black paint/ink. Easy!

Students were each given a slab of low-fire terracotta clay, were shown an owl shape on the board, lightly drew their shape on the clay and cut it out using a wooden skewer. Then they smoothed the rough edges with some water.

Eyes were punched out with plastic lids, stamped in the middle with the top of a marker, and lines were drawn around the eyes. The beak was then drawn and cut out. Students then scored and slipped the eyes and beak and attached them to their owls. Wings were drawn, and texture was added with clay tools and the tops of markers. 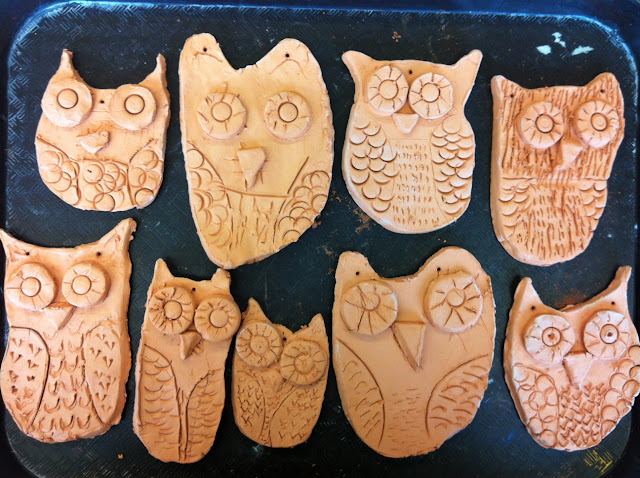 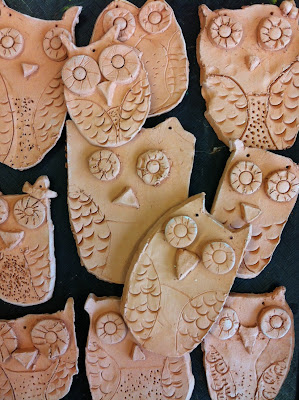 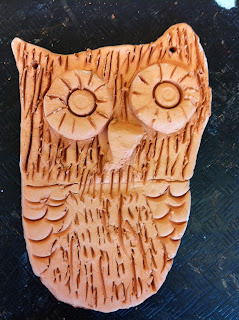 Later in the day, I went around and poked one or two holes on each owl's head for hanging purposes. Then I placed wet paper towel over each one to minimize cracking in the drying process.

The owls have just been fired now and the kids are super excited to work on them in class next week.

I wanted to test out the finishing process, so here is my owl. I coloured on it with oil pastels and gave it a bath in watered-down India ink. Then I dried it off and attached some copper wire to hang it.


Students' owls to be posted next week!

Danielle
Welcome to Art Room with a View! I teach art to 500 children from Kindergarten to Grade 7 in Vancouver, BC in a room with a phenomenal view of the mountains and the sea. Visit often to see what we've been up to in my art room and feel free to borrow ideas or leave a comment if you'd like!